The browser you are using is not supported. Please consider using a modern browser.

Get Ready to Race

Here you'll find all there is to know about the Dragon Boat Races. Dive into the details on the team sponsorship options, check the calendar for upcoming events, and read up on the rules and history of dragon boat racing. This year, we're making the race more accessible than ever with a sea of ways to join in the fun. 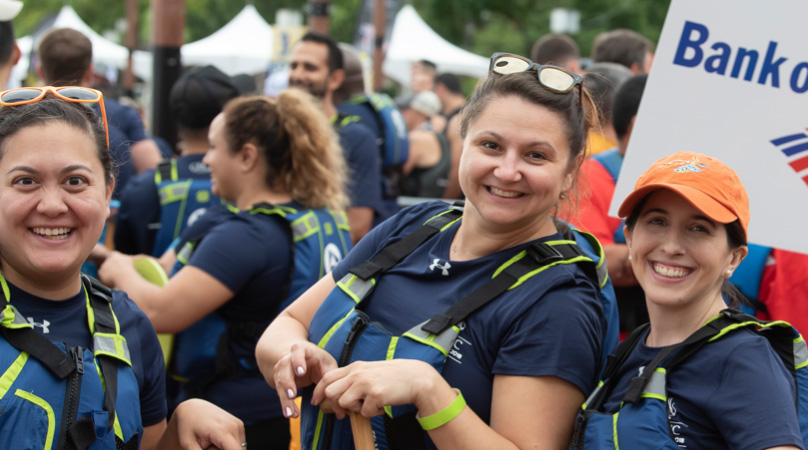 Teams are comprised of 25 members (company employees, vendors, family, or friends.) There are 20 paddlers (minimum of 8 women), 1 drummer, and 1 steerer. The 3 other members rotate or serve as alternates.

Practices happen once a week for 8 weeks during a designated timeslot under the supervision of our coaching staff.

Race Day involves time trials to set brackets for elimination heats. The competition is exhilarating as teams battle throughout the day for the coveted Dragon Cup!

For those who want to join the fun and excitement of the Dragon Boats Races but aren’t inclined to paddle, there are team spirit competitions. Participants show off their creative sides as they decorate their team tent for the Tent Competition and write a song for the Chant Competition.

Dragon Boat racing is a reflection of a memorable historical event that occurred more than 2,000 years ago. Numerous supremacy wars were erupting during the fourth century B.C. when Emperor Chu’s kingdom was one of the mightiest remaining. It is a story of self-sacrifice.

A man of great respect, Qu Yuan, a poet, minister and counselor to Emperor Chu, was cast into exile because of his politically sensitive poems. Distraught and inconsolable, Qu Yan grasped a large stone and threw himself into the Mi Lo River in an act of desperation and sorrow. His last poem can be translated: 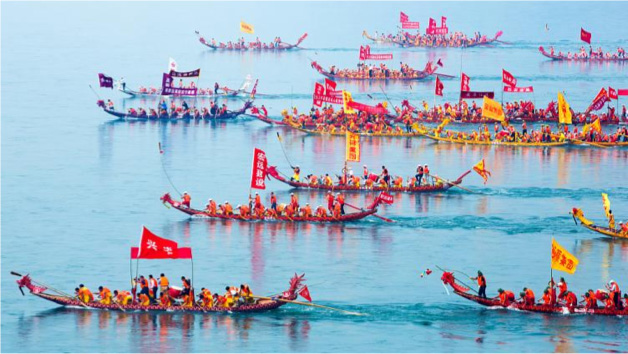 Many a heavy sigh I have in my despair, Grieving that I was born in such an unlucky time. I yoked a team of jade dragons to a phoenix chariot, And waited for the wind to come, to sour up on my journey

Qu Yuan was loved so by the people that local fisherman raced to the tragic scene in their long, swift boats, beating their drums and splashing their oars to scare the many fish away from his body. They threw also tossed rice into the river some say in an attempt to protect Qu Yuan’s body from the fish and others to feed his soul.

Dragon Boat Festivals are held in China on the fifth day of the fifth month of the lunar calendar, the same day Qu Yuan is said to have drowned himself in the Mi Lo River. Many of the original rituals are still practiced today at festivals all over the world. As part of the opening ceremonies, a common practice is to “Awaken the Dragon” by dotting the eyes of the Dragon’s heads of each of the boats. Historically, the Dragon was the favored symbol of the Emperor, and the best Chinese artists were commissioned. Shortly after one such artist put the finishing touches on his work by etching the eyes on his exquisite stone Dragon, thunder and turbulent weather swept the land. It was believed the mythical beast was “awakened” and had “come to life.” Also, the significance of the eye dotting was to impress the boats and their crews with the strength of the Dragon and the blessing of the Goddess of the Sea.